Sibling rivalry. It doesn't *just* happen to other people's kids.

Micah is all about spy robots and butterflies, monster cats and purple ducks, flying bagels and teeeny tiny dinosaurs with razor sharp teeth. He's super imaginative and loves to narrate elaborate and highly inventive scenarios (which, incidentally, often involve a robot wielding an ax). I think it's awesome. I've been gaga about him from the start, but this brings the ol' parental awe to a whole new level. He's an amazingly verbal, smart, creative kid (And hilarious!! Did I mention hilarious?!?). Turns out Eli, however, is not so gung-ho about the whole thing. You might even say that this particular development drives him APE-SHIT-BAT-SHIT crazy. I think, because, as the older sib who's been guiding the imaginary play for years, he's accustomed to being the one in charge, the one who directs the flow of play, the one who bosses Micah around, the one who gets to use the baby as a prop. So these days, when he sees Micah getting his ax-wielding groove on, he's quick to step in, demanding command of the play. Case in point, a little story from last week:

Eli refused to back down and trailed uncomfortably close to Micah, purposely preventing him from carrying out his play.

They sorted it out pretty quickly and I have no real point here; just wanted to share this story and express something like: "*Sigh.* Having two kids is INSANE sometimes." I'm certainly not looking to offer any advice on how to deal with sibling rivalry. Other than, for the love of GAWD, those of you with just one bundle of joy, please *please* quit while you're ahead. And if you insist on having another (or more... gasp!), quick grab yourself a copy of "Siblings Without Rivalry" cuz for serious it's, like, amazing and *saves my shit* on a regular basis. Best 5 bucks I've ever spent (actually scored it free at the Book Exchange... but still!). Okay, I'm officially rambling and you all know that I'm mostly joking and actually love being the parent of two such brilliant and charming chiddlywinks and think you should go forth and make as many babies as you damn well please, right?

Micah the space lego man was designed by the amazing Teri Strelchun. Cool, eh?
Posted by Saberlowe at 9:55 AM 1 comment:

Spring in the Garden and munchkins munching greens 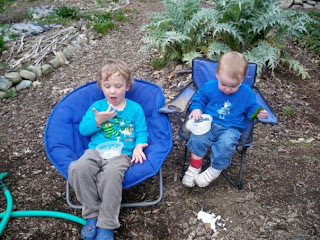 Our afternoons, these spring days, generally proceed as follows: shortly after Micah wakes up from his nap, he and Eli race (racing being their current preferred way of getting around) up to the garden, armed with two kid-sized chairs and two bowls of dip. They then pick a handful each of sorrel, park themselves in their chairs and *hork the fuck out.* After devouring his handful, Eli often moves on to broccoli then kale then lettuce, all of which Micah eschews for more sorrel.

They both love picking and eating greens from the garden, but let's be honest: the real key here is The Magic Dip (they actually stick their faces in their bowls to sop up the last leeeeetle bit). For those who are interested, the ingredients are: yogurt (plain, unsweetened), agave, flax oil, ground-up walnuts, vanilla. Eli describes it as "pretty yogurty."

So on to the garden details:

What we're harvesting: Broccoli! Also: sorrel, lettuce, arugula, green onions, herbs. But mostly broccoli :) We snack on it regularly, and yesterday, had it (steamed, with cheese sauce) for dinner. Deelish.

How about you? What are you planting (both literal and figurative responses are welcome)? 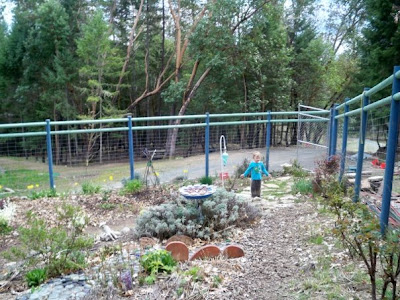 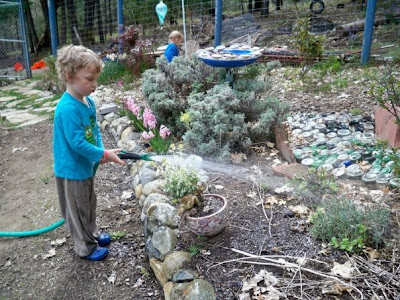 Micah, now two years old (!), is full-fledged unstoppable walloping force o' toddler! He's funny and charming and *loves* to make people laugh. Some of his favorite ways to do so include: saying things deliberately wrong ("No, I don't want mac 'n cheese -- I want back 'n cheese!"), randomly inserting "pee", "poop" or "fart" into the conversation ("A, B, C, D, E, F, poo, HAHAHAHHAHA"), which makes me very happy and proud, and cracking jokes about letters. Yup. You heard me. Letters:

He loves to sing, mostly nonsense songs (last night he busted out with this: "You have three nipples... three nipples. Yeah yeah yeah!") but also loves to sing the alphabet and other familiar tunes. He's been really into letters and numbers for some time and recently taught himself to recognize all (yes ALL!!!) the upper- and lower-case letters. And numbers zero through nine! He's also curious about spelling -- though he persistently reads the letters of each word backwards. When we walked by the "Sarah Lane" street sign on our hike the other day, he muttered to himself: "H-A-R-A-S spells Sarah" :)

He received one of these for his birthday (It's fridge magnets on crack! Seriously, imagine the fridge magnets of your childhood crossed with a GIANT ROBOT) and now knows the sound associated with each letter. (The sound quality is terrible though, so he's a little mixed up: "An x makes a
Posted by Saberlowe at 2:48 PM 1 comment: