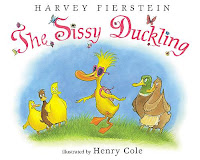 Okay peeps, I promised to use this blog, in part, for book reviews, so here goes... It's Sarah's Super Silly (though Sometimes Serious) Story Synopsis! I'll be doing mostly adult fiction (not *that* kind of adult fiction; get your mind out of the gutter!), likely heavy on the sci-fi (since that's what I read), but my recent forays into literature (sci-fi and otherwise) have left me uninspired, so I'll be kicking it off with a newly favorite kid's book: Harvey Fierstein's "The Sissy Duckling."

Anyhoo, so yeah, back the "The Sissy Duckling." This book is awesome. It's got everything you could hope for in a kid's book:

It's the story of Elmer, a super cool young ducky boy, who sports a hot-pink floral backpack, and loves to decorate cookies and stage elaborate puppet shows. He's a super charming character: sassy and resourceful and smart... if only his father and the other ducks could see it. But no, instead they see a boy duck who's different from all the other boy ducks. In fact, there's not "a single other little boy duckling who liked to do ANY of the stuff that Elmer did. Not one." So they dub him a sissy.

It's super well written and heartbreaking to read (have I mentioned that I was reduced to a weeping puddle of goo the first dozen times I read it?), but, thankfully, it's got a happy ending-- Elmer rises to near stardom when he (*spoiler alert*) uses his kickass homemaking skills to become the first duck EVER to survive the winter without flying south!

Sounds awesome, eh? I'm actually not generally a fan of kids books that go out of their way to make a point. I prefer stories to morals. But color this an exception. Partially cuz it's got something super poignant and important to say. And because the "point" is impeccably woven into an engaging and funny story.

One of my favorite parts is when, at the end, Elmer goes out into the big wide world and realizes that there are, in fact, other ducks like him. Lots of em!

And, yes, the author is *the* Harvey Fierstein.
Posted by Saberlowe at 11:32 AM