My name is two and a half! 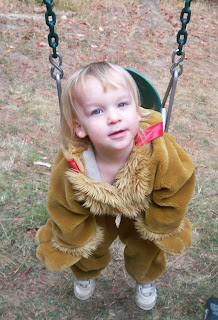 I've been a little slow to schlep this post from brain to blog, but here goes: Micah is two and a half! Whoohooo! In traditional A-Lowe style, we celebrated with a wicked yummy half cake, which, as per the half birthday boy's request, was chocolate with more chocolate and cherries. I wish I'd snapped a pic, but it was devoured (omnomnom) before I thought to. If you'd like to picture it, though, just imagine a perfectly circular chocolate cake. Now (using a little jedi mind kung-fu), cut it in half. Voila! Doesn't matter how you slice it (hah!) -- twas deeeelish! Micah still talks about it most days: "Hey Seeerah, how old am I? ... And what did you make for my birfday?"

Speaking of Micah... and talking -- wowee, does the kid ever have a lot to say. He's crazy non-stop talker boy and regularly stops strangers in their tracks with his mad language skillz. I've become accustomed to answering the age old: "Damn, he's a good talker... how old is he?" I've even had several people try to persuade me that he can't possibly be two and a half with such mad skillz. (Only, I don't think anyone actually used the phrase "mad skillz." Lame.) Anyhoo, yes, he's a fabulously verbal kid. Brilliant brilliant brilliant!

For all his precociousness, he is, in many ways, just your typical unstoppable and adorable toddler. He loves to run, jump, climb, to splash in the kiddie pool and defeat the bad guys who invade his turf, to play video games and surf youtube for hours on end... Okay, so maybe the last two aren't exactly your typical toddler variety antics, but they *are* awesome and hilarious. He's a self-sufficient computer user and plays kideo games like a pro. Just yesterday, he figured out how to use bookmarks to start up his favorite games (lucky for him since typing is one thing he can't do). His current game of choice is Widget's build a robot. It's a puzzley one, where you drag chunks of dismembered robots to their appropriate spots and it is, unsurprisingly (given its current popularity amongst A-Lowe chiddlers), also the inspiration for his and Eli's Hallowe'en costumes. Micah's gonna be "a driving robot" (he calls anything with wheels "driving"... the first time he saw a roller skate: "Look, a driving boot!"). And what's Eli going to be, you're surely wondering? Why everyone's favorite chicken bot robot: robo-cluck 3000! We're starting on the costumes any day now... wish us luck!

Other toddler odds and ends: he loves to paint, draw, "write" and spell, and, for now, these four things are actually one pastime, which he charmingly calls "art." Yesterday he drew a "robot with 100 legs." In truth, I drew the legless bot and he just added the appendages (and there weren't actually 100 of them, but who's counting?). He also loves to arrange letters to spell familiar things (he sight reads quite a few words). He whipped up this masterpiece all on his own: 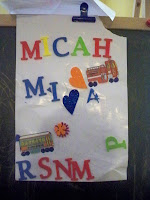 I think it's a bit of a fluke that his name turned out so orderly and perfect; most of his spellings contain errors (though he is very careful not to arrange letters backwards -- I've even seen him correct Eli on this front). He just makes mistakes when he gets excited: the word will start out just fine and then veer off into craziness. When he spelled my name the other day, it turned out something like this: SAR1GNR16TY7!!!!! He also enjoys tracing letters and writes a few on his own (so far I, T, O and L... whoohoo! He's well on his way to writing ROTFL!).

It's hard to talk about Micah without talking about Eli. They're bestest buds and do most everything together. Triking, swinging, slaying robots, devising elaborate plans to defeat evildoers everywhere, saving each other form the SUPER-evil tape measure monster. It's *really* cool. Don't worry, though, I'm not deluding myself into thinking that they'll surely be best friends for life. Believe you me, I've seen the other side. But for now I'm gonna enjoy every wee second of it.

I'll leave you with a heartwarming story of the two of them: they often incorporate video games into their imaginary play -- it's hard to convey the sheer geekiness of it all, but basically they play out the precise and elaborate details of their favorite video games. It's not uncommon for me to hear, for example: "Okay, we've defeated the huge flying boss; on to the next level!" Last week, they were going at it, as per usual, when I overheard this:

Cute, eh? Only not quite as cute as this (sorry, this really is my last point!). I recently took a stroll down memory lane through old pics and videos (something I seem to do often around their bdays) and found this, possibly my fave ever video of the chiddlers:

Taken almost a year ago! Micah is 19 months and Eli almost 4.5. And *this* is why I love taking videos of the chiddlers. They both look and sound so different-- it's so easy to forget how quickly they change, but there it is! Crazy!

(p.s. the title of this post was inspired by this.)
Posted by Saberlowe at 12:18 AM No comments: