The chiddlers, as usual and like kids everywhere, spent the year saying hilarious shit. Yep, it's that time again; my 3rd annual shit my kids said!

(Each paragraph is a stand alone quote or conversation.)

Eli, getting himself dressed and ready for bed: "I need help getting this on!!!" David, in response: "No, you don't need to wear a spider man mask to bed."

Micah, after being asked by a stranger if he'd been a good boy and expected Santa to pay a him visit yaddda yadda yadda: "Haha! Are you joking? Santa's not real!" Stranger, aghast: "Of course Santa's real!" Micah: "No, he's not! David told me he's not!" Stranger, now addressing Eli: "You told your brother that Santa wasn't real?!" Eli and Micah, in unison: "No! David is our dad!"

Micah, in an attempt to bribe David: "If you have a glow-in-the-dark dance party with me tonight, I'll give you one orange m&m."

Me, to Micah, in a crowded restaurant: "Pleeeeeease hurry up and finish your lunch; I reeeeeeeally need to go to the bathroom." Micah, in response, at the top of his lungs: "WHY? DO YOU HAVE DIARRHEA?"

Micah, explaining what he and Eli were up to: "Well, we're shark hunters and we're really rich because everyone loves our delicious shark meat and the government has decided to print an a million dollar bill for us and they're even thinking about printing an infinity dollar bill!!!"

Micah: "I'm growing my hair long so I can have a curly ball on the back of my head just like Sarah does!"

Eli, to me, on our descent from Table Rock: "You know what I think would be an awesome adaptation to protect us from predators?" Me: "No... what?" Him: "If we could run at the speed of light." Yup. That would do it.

My brother, Joe, to Eli during a discussion about Eli's future career as time machine inventor and operator: "Do you think you might travel back to the time of the big bang?" Eli: "I wouldn''t need to; I would just build a telescope big enough to see the big bang." Joe: "Oh really?" Eli: "Yeah, because looking up into the sky is really like looking back in time." Joe: "..."

Micah, after gushing about how much he missed me while I was away: "Wait... what does it even mean to miss someone." Me: "It's when you're sad that someone is away and you wish they were with you." Micah: "Ohhh! Well, then I didn't actually miss you at all!"

Eli, singing: "Damn!" Micah: "Are you singing Last Friday Night?" Eli, in the condescending tone he reserves just for Micah: "You know, Micah, Last Friday Night isn't the only song with the word damn in it." Micah: "Well, are you?" Eli, sheepishly: "... yeah."

Micah, reading the title of a book: "Night of the Nin...ja...s. Wait! Why does it say ninja instead of ninja?!?" Me, confused: "Er... cuz ninjas is what they're called?" Micah, laughing his ass off: "I always though they were called MINjas... hahahaha!"

And with that I bring you, the chiddlers. As photographed by each other during a leisurely drive to town. 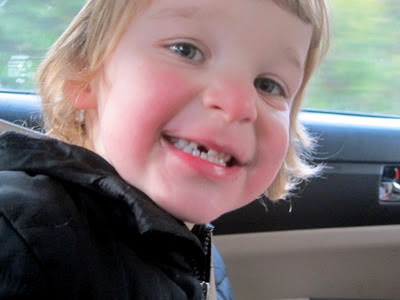 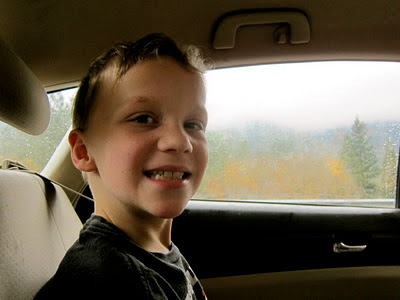 Posted by Saberlowe at 7:31 PM