Cushing's: My story, a journey through hell and back

Apologies in advance to the squeamish among you, but for the month of April, my dysfunctional endocrine system is hijacking this blog. April is Cushing's awareness Month, and I'm accepting the Cushing's Awareness 30-day blog challenge. Well, sorta. My goal is to blog more than usual throughout the month of April, though not daily. I wish, but there's just no way. I do hope to bring awareness to Cushing's disease, a devastating condition that within the medical community is considered to be exceedingly rare, but among Cushing's patients is suspected to be not particularly rare, only rarely diagnosed. I hope to contribute to the amazing awareness my fellow Cushies have been spreading, so, please -- friends, family, random internet folk -- be super swell and share my Cushing's related blog posts this month... like this one!

So, yeah, Cushing's. As most of you know, I'm a bit of an expert on this particular topic. And those of you not yet familiar with my decade plus long health saga I think will soon agree that my self-proclaimed expert status is well deserved.

Cushing's is an endocrine disorder caused by prolonged overexposure to the hormone cortisol. Cortisol -- a life-sustaining hormone produced in the adrenal glands -- does all kinds of super important things. It regulates blood pressure and blood sugars, supports the immune system, regulates the metabolism and helps the body in times of stress. Sounds great, eh? It is. Unless, like me 5 years ago, you have too much of it. Then it is very very horrendous and sucky and a bad, bad, bad big ol' pile of shit.

The whole "too much cortisol" thing is called Cushing's Syndrome. Cushing's *Disease* is a bit more specific: basically Cushing's syndrome occurring as a result of a small, non-cancerous (technically "benign" but fuck that!) tumor on the pituitary gland. The tumor secretes excess amounts of the hormone ACTH, which in turn tells the adrenal glands to make too much cortisol.

For me, the whole terrible mess started about 13 years ago, with a sudden onset of symptoms while I was living in San Francisco. I got very sick, very suddenly. My list of symptoms was extensive and included: crazy sleep problems, extreme dry mouth and chronic thirst, heart problems (though they were relatively minor at the time), distressing skin problems, rapid weight gain, GI problems, sore muscles, and exhaustion. This really is just to name a few, but I'll spare you the details. The hyper-curious among you need just google "cushing's symptoms." Lucky me... I got them all.

As you might imagine, I was freaked out and felt as though something had gone terribly wrong with my body. Those of you who knew me well probably remember my frequent trips to the doctor. Unfortunately, they came up with ziltch. Nada. Nothing. And at the time, nobody even mentioned Cushing's. When we moved from SF to OR, I gave up looking for years and went on with my life.

My symptoms continued, and I continued to feel unwell, but not horribly so. Overall, I was able to lead a super happy life despite my underlying health problems and, though I did continue to feel like something was wrong, I'd convinced myself that it wasn't anything serious.

Boy was I wrong. It hit me like a slap in the face about 6 years ago, when my health took a very sudden turn for the worse. All my symptoms worsened and I developed new ones. My hair started falling out in clumps. Despite the fact that I was making a huge effort to keep my body strong, through hiking and yoga, my muscles weakened to the point that I was barely able to do simple things like get up out of a chair and walk. I developed some serious problems with my heart (doc: "you're not leaving this office until you start this blood pressure medication") and all kinds of other things  started going haywire.

I knew something was seriously wrong. Fortunately, I lucked out with a very smart doctor who strongly suspected I had the little known, "very rare", Cushing's Disease. Unfortunately, I wasn't able to see her again... and my next few doctors were clueless and doubtful (i.e. convinced it definitely wasn't Cushing's and hesitant to believe there was anything really wrong with me at all). I decided to start researching online and from the moment I first read about Cushing's, I knew, without a doubt, that I had it. David was more than a little sketched out about the idea of self-diagnosing on the internet, until I forwarded him an article on Cushing's, at which point he was also completely convinced. For him, it was partially that I had every symptom and that he already knew I had high cortisol (the one  consistent thing that had been turning up in my lab results). But mostly, he diagnosed me based on one symptom, which he had never even thought of as such. You see, one of the telltale signs of Cushing's is bright purple striae (which is a fancy and somewhat more flattering word for stretch marks) that appear on your abdomen, boobs, back and other parts of your body. I started getting them everywhere very suddenly when I first got sick 10 years ago, but we never thought of them as a symptom. We just thought they were weird.

After my experience of being brushed off by doctors for so many years, despite the fact that my symptoms and lab results pointed to Cushing's, we decided to skip the middleman and travel to see a Cushing's specialist.

Turned out that was about the best decision I've ever made. The testing process was INSANE and involved a month of near continuous peeing in jugs, fedexing spit samples and blood tests. Sadly, due to the often cyclical nature of the disease, Cushing's can't be ruled in or out by just one cortisol measuring test, so proper testing involves repeated and diverse testing, to improve the odds of catching the high cycles of Cortisol. My doctor also ordered a pituitary MRI to check for a tumor. The long and the short of it is that my MRI did indeed turn up a tumor, and my biochemical tests proved that I had high cortisol as a result of the tumor. All in all, once Cushing's was suspected, my diagnosis came relatively quickly, something for which I am very grateful.

The first treatment step was brain surgery to remove the hormone secreting tumor from my pituitary gland at the base of my brain. Unfortunately, it turned out to be the second and third step as well. Yep, I'm an official card carrying member of the brain surgery guild, three times over. Unfortunately, all three surgeries failed to cure the Cushing's and I was left with a mostly broken pituitary gland, and only one feasible option to cope with the Cushing's: the removal of both adrenal glands, or what's known within the Cushing's community as a BLA (bilateral adrenalectomy). Even this was no guarantee of a cure, as Cushing's persists in a small fraction of patients who undergo the procedure. Fortunately and finally, it did turn out to be my cure. Three year ago, almost exactly, after over a decade of symptoms, I was finally Cushing's free.

Recovery has been a process and often a slower one than I would have liked. Imagine trying to undo over a decade of disease damage; then throw in a new chronic disease to contend with. You see, the huge downside to having my adrenal glands removed is that I now, well... have no adrenal glands. :) And because the adrenal glands produce life sustaining hormones, not having any is in and of itself a pathological sort if thing. Fortunately, unlike Cushing's, it is a manageable disease thanks to modern medicine... and a husband who reminds me to take my meds when he notices I'm becoming unusually cranky.

The good news tho is that, I am now -- 3 years later -- doing extremely well. Every one of my symptoms has resolved. I've gone from deathly ill to pretty darn healthy. I have my life back. I'm healthy and strong.

Well, there you have it: the not particularly brief version of my health saga. A cushie's story is never quite complete without pictures to document the transformation from not sick to sick and back again. I have mixed feelings about sharing these pictures and in general making a big deal about the weight gain aspect of the disease and weight loss aspect of recovery. My reasons are twofold: 1) I'm an intensely private person especially when it comes to my body and find it incredibly awkward when folks, especially strangers, comment on my weight loss. But mostly 2) I think the cultural obsession with thinness is COMPLETELY AND THOROUGHLY FUCKED UP and don't really relish the idea of adding to societal body image neurosis by bragging about my weight loss. That said, extremely rapid weight gain for me was a medical symptom of a nasty disease, and was very hard on my body. Losing weight has been a very important part of my recovery. So here goes, pictures. When most people see these they see only weight loss. When I see pics of me with Cushing's, I see how very sick I was. 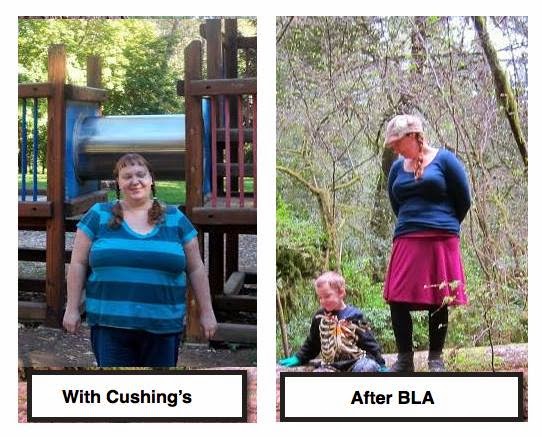 Here I am looking healthy, happy and and strong: 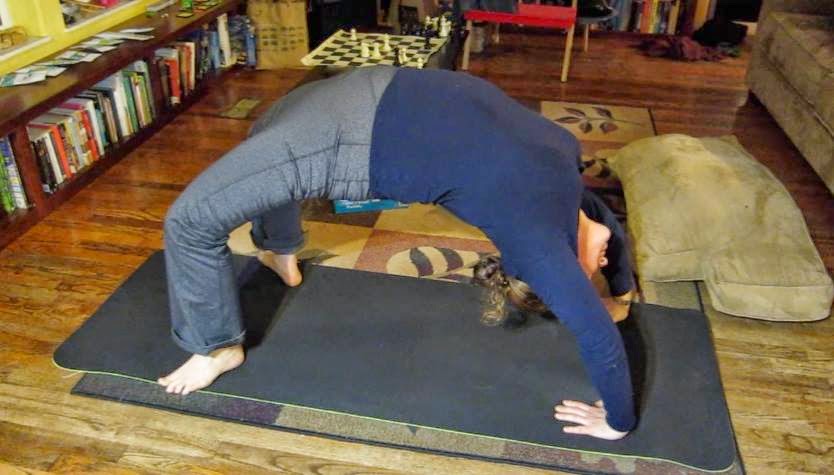 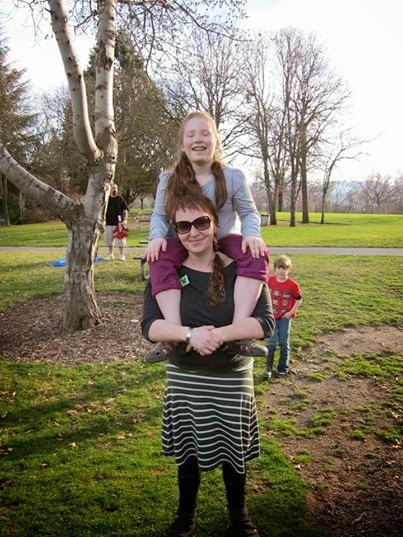 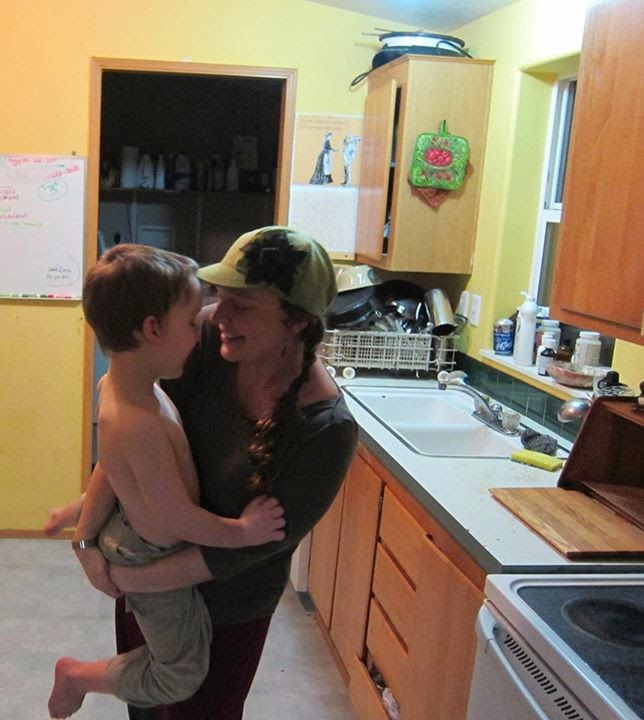 Okay, high fives all around to those who've made it this far. Seriously, you rock and I really appreciate you reading my story. And I'm really done now.

Except for these few Cushing's links. :)
My doctor and fellow Cushing's patient, Kate, on National Geographic
Cushing's on Wikipedia
Cushing's Help