As most of you know, my kids are a wee bit inclined towards the obsessive. When they get excited about something they get *really* excited about it, want to do it repeatedly, study it deeply, know everything there is to know about it, etc, etc. Well, last week Eli acquired a shiny new one (obsession that is): going to the movies! The whole thang was spurred, at least in part, by the heatwave. Yep, *that* heatwave, the crazyass one that made it pretty much unbearable to be outdoors for more than a few minutes at a time. I am not, BTW, a wuss when it comes to summer weather. 95 degrees and sunny as hell? Bring it on. But last week was ridiculous -- the temps topped 105 most days and got up to 109 (or some such craziness) on two separate occasions. Yeah. It was brutal. So in a desperate attempt to keep the kids unbored while stuck indoors, the air-conditioned theater offered sweet refuge, a home away from home. For both the chiddlers, but especially for Eli, this made quite an impression... to say the least. It's now the first thing he asks about upon waking ("Are we going to the theater today?!?") and as he dozes off late at night ("Any new movies coming out tomorrow?"). Unfortunately, it's been a bit trying for me to indulge this particular obsession. Turns out I'm not the type to see the same kids movie more than twice in one week, guinea pig spy thriller included, unfortunately for Eli. You see, Eli thinks G-Force is a gift straight from the heavens and would happily watch it 6 trillion times in a row. He's keen to sort out, understand and memorize the subtle plot nuances (something he does with pretty much all his fave movies and books) and apparently seeing it twice wasn't quite enough. Remember were talking guinea pig espionage. Pretty heady stuff. Anywho, I'm pretty sure that, by societal standards, he's not old enough to be dropped off at the theater by himself (though, admittedly, I'm tempted) and I'm *very* sure that I'm not seeing G-Force a third time. Sooooo. Anyone wanna take my kid to the movies? No seriously. Please help a mama out here.

He's a cutie that one. And to prove it: one more charming Micah story. But first a little backstory (to catch you up on how things roll here at the Rancheroo). I'm big into allowing my kids food independence, meaning that I let them eat whatever they want whenever they want it (Yeah. I know. It's crazy radical in a culture where it's generally assumed that parents control their child's every move). The way this plays out in our home is that they basically graze all day long. David's cool with this, except that family mealtime is super important to him, so we've come to the compromise that they can graze as much as they like, until about 4pm, at which point I put all the food away, in hopes that they'll be hungie for din-din and join us at least for a few minutes at the dinner table.

Okay, so this is really cute. A few nights back, Micah and I spent the better part of the pre-dinner hour hanging out in the garden and he was way *way* stoked that the tomatoes had finally turned red. He immediately went to stripping the vines and horking out like a crazyperson. Somehow, I just couldn't find it in me to stop him, to say: "No Micah, don't eat those mouthwateringly scrumptidilyumptious tomatoes; you're gonna spoil your appetite!" So I let him go for it and he went on to devour every ripe tomato (there were half a dozen or more biguns), all the while waxing poetic about his new favorite veggie. By dinnertime, he was covered head to toe in tomato juice, dancing around, singing about his new found love. Check him out: 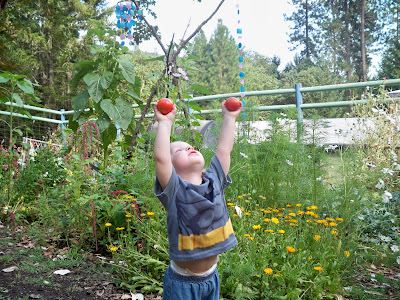 See! What a cutie!

On that note, I'll leave you with a few adorable random chiddler quotes...

Eli, after watching me get my ass kicked at Age of War: "How come David always wins at videos games and you always lose?"

Micah, acting out his favorite scene from Toy Story 2, to David: "I AM YOUR FATHER!"

Eli, defending the plight of the misunderstood: "People think that zombies are bad cuz they eat people's brains. But they're not! Brains are just what they need to eat!"

And last but not least, one that's likely to melt your heart into a *GIANT BIG* puddle o' goo...

Eli: "Hey Sarah, I'm hungry. Could you run up to the garden and pick me some vegetables?"

Okay, that last one was a lead in to Part 2 of the update. Coming soon. Until then, a picture of my purdy house as viewed from the garden. Just cuz. 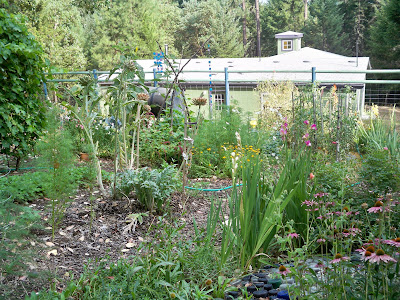 Posted by Saberlowe at 2:54 PM