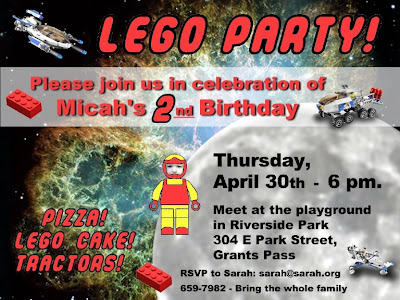 Micah's Lego party was a smashing success and I've got the pictures to prove it! Check 'em out here.

I spent the better part of the week concocting all kinds of Lego-stuffs -- including a quaint and colorful house complete with rooftop garden, a robot-airplane (or was it an airplane-robot?), a rocket, two front-end loaders, and a dinosaur with light up eyes (Truth be told, I can only take credit for the head. David assembled the rest of it. But, OMG, the head! *Was* *really* *cool.* Think rows and rows of little pointy teeth. And did I mention the light up eyes?!?) -- only to have them all destroyed within minutes of reaching the playground. Aww well. Such is the transient nature of Lego, I suppose. Plus, Micah had the *time of his life* watching and helping me put it all together, so it's all good.

Thanks to everyone who came out to help us celebrate! Micah is absolutely crazy for all the gifts (I'll letcha know when the new-toy buzz wears off, but given the quantity and caliber of loot aquired, I'd venture at least a week...) and spent the afternoon playing his harp and harmonica, working on his puzzle, messing around with his finger paints. He also asked me to assemble his new clone walker (thanks Hamsders!), which I was more than happy to do. I'd actually been eyeing that particular kit for a while and we even gifted it to our nephew earlier this year. So I was super stoked to add it to our collection. Plus, it was relatively easy to assemble :) Micah was *thrilled* with the way it turned out and spent a good 30 minutes carrying it around, chattering away to himself: "Look at my new robot! And look what else! Two more robots are sitting in the robot! Awesome!"

Speaking of, he also received his very own *ROBOT BACKPACK* from the Hannas. When first unveiled, I was so awed by it's beauty that I failed to consider it origins. It was only later that I thought to wonder where they got it. It looks handmade, so I figured that Felicia scored it on etsy or some such. And then it hit me: OMG! She made it! Duh! Cuz she's Felicia and she's amazing like that. Check it out: 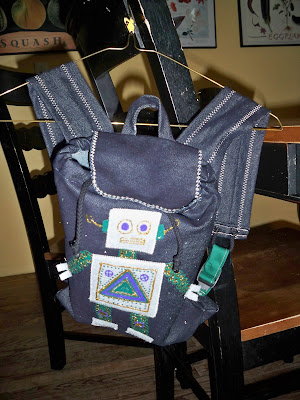 See what I mean? Amazing.

Happy bday little Micah! You are one unbelievably cool two year old and I am so very grateful to be your parent.
Posted by Saberlowe at 8:43 PM