The Evolution of a Superhero Obsession 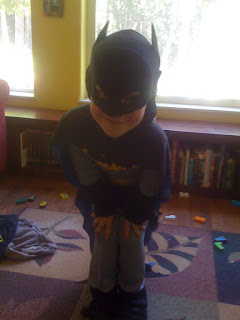 1 month ago: Eli watches his first ever superhero movie (Batman) and thinks it's the *coolest shit ever*.

1 week ago: Courtesy of the infinitely wise Aunt Brynna, he learns the details of all the superheroes with whom she is familiar (including Spiderman, Superman, and Wonder Woman). The phrase "Fighting crime" enters his vocabulary. A lot.

Today: He talks and thinks near continuously about superheroes: creating intricate and highly inventive scenarios involving both Batman and Superman (with a little Spidey, Wonder Woman and Darth Vader action thrown in), engaging us in endless discussions about the relative powers and weaknesses of each, parading about in his Batman costume, surfing the Internet for any and everything to do with superheroes.