Since I finally have some good news to report on the health front, I figured it's time do a little bloggy CPR. Yep, time to breathe some life back into this baby!

Life is so good! I feel amazing! I think what I actually feel is simply normal. Possibly even healthy (not to get too totally carried away). But for someone who's been battling Cushing's for a decade followed by a year of panhypopituitarism, normal -- and especially healthy -- is FUCKING A-MAAAAAAAY-ZING. I have a urge to scream it from the roof tops: "Hey, ya see this chick here?! Meeeee! Yeah! I don't feel sick. Not terribly so anyways... and it's only gonna get better from here on out. YAH BABY!!!!" But since shouting from the rooftop of our smack-dab-in-the-middle-of-the-woods home would be utterly pointless and unheard, I think a little letting loose right here on the internet is in order. Say it with me people: WOOOOOOOOOLLY WOOOOOOOOOOLY!

Now, I have to admit that maintaining this state of normalness is an arduous process involving a daily drug regime that could rival the likes of most any medical patient (or raver). 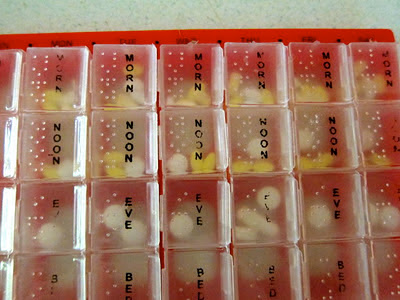 Clearly for any normal person, this would be more than enough medication to get you through a day. But for is post-Cushing's panhypopitters? Nope, not so much. In addition to the candy-store of goodies pictured above, I also baste myself thrice daily with hormonal gels. And then there are the nightly injections (the butt ones are particularly riotous).

Crazy, I know, but worth it.

Life is settling in to a new fabulous wonderful normal. The chiddlers are amazingly adaptive and have weathered the last few years with unbelievable grace (and cuteness). They're sweeter and more full of love than ever and are just doing fantastically. Eli is crazy into evolutionary biology, particularly predator-prey relationships and prehistoric sea life. He adores swimming (though, not with prehistoric sea-life; in fact, he often warns that if you were to find yourself thrown back in time into the Jurassic, no matter how dangerous it seems on land, NEVER EVER GO INTO THE SEA!!!). He also loves chemistry and usually has some chemistry project going (either on our kitchen counter, in our fridge or in our freezer). Other interests include: math, astronomy, money, marketing, economic and woodshop. Also: kenkens.

Micah, my super affectionate little sweetie, has become a passionate hiker. In addition to our regular hikes around the Rancheroo, we've been tackling one very long strenuous hike per week as a family. Recently, while we were hiking Tablerock, a lovely volcanic plateau 30 minutes from the Rancheroo, Micah received a ton of praise from passers by (it's VERY steep and not generally thought of as a kid friendly climb). One particularly impressed passerby stopped Micah: "How old are you... only four, wow, you are the youngest person I've ever seen hike to the top of Tablerock!!!" To which Micah responded: "Welllll... I do eat a lot of protein" and then flexed his muscles... Arrrrrrr! As we neared the top of the trail, he so appreciated all the encouragement he received from the hikers heading down the mountain. "You're almost there!" they cheered him on. On the way down, he extended the same encouragement to next generation of climbers. "You're almost there!" he exclaimed and then watched as they melted into puddles of goo from the overwhelming cuteness. We had to ask him to put it to a rest, though, when we were almost a quarter of the way to the bottom and he was still doling out the you're-almost-theres.

Other Micah odds and ends: he's crazy for phonics and in the past week has surprised David and I with how much he's able to read (a lot!). He's loves to bead, is learning french, loves everything math, and bursts out into song and dance every chance he gets (which, as it turns out, is often). His favorite expression is "Don't let the cat out of the bag."

Speaking of letting the cat out of the bag! I think I should do just that (sorry, Micah). Yahhh see; we've got news! We're planning to move! Not immediately, because we have some pretty major travel we want to do first, but sometime in the nearish future, we're planning to leave our property (anyone in the market for a Rancheroo?), so we can move to a different part of the valley. It's been a hard decision and, in many ways, a sad one, but, as much as we adore our property, we've developed absolutely no connection with our closest town. I won't go to into the details, but suffice it to say that the town just plain sucks, errr... I mean, it doesn't suit our needs or personalities. On the other hand, we're quite charmed with another nearby town (about 45 mins from where we currently live) so we've decided to make the move out that way. We'll find another place in the woods, of course. And don't worry; it won't really be like giving up our Rancheroo, just moving on to a new one (we're even planning to call the new place Rancheroo Take 2). Everyone I've told so far has expressed surprise and sadness about our plan to leave this amazing property. I have to say that it's a pretty freakin' awesome feeling to know that so many of our close friends and family have fallen just as in love with this place as we have. In your honor, we promise that Rancheroo Take 2 will be equally epic! And near a town that doesn't totally suck!

We're all pretty stoked. Micah liked the idea of moving to a new house but was emphatic that we continue living in the woods. Eli agreed completely but had to admit that the city did offer some lure to him: "I would be the richest kid on the planet if I lived in the city!" Not following his logic, I asked what the fuck he was talking about (maybe not quite in those words). "Well," he explained, "think of all the costumers I'd have for my lemonade stand!!!"

So yeah; life is good.

Thank you to everyone who helped us through the fucked up shithead of a nightmare that was Cushing's. They say it takes a village to raise children. Well, apparently it takes a network of friends an family, scattered about the US and Canada, to raise children when their mother is in the throes of battling a hormone-secreting pituitary adenoma.

I truly cannot express how grateful we are for the outpouring of love and support we received. You all rock my world.

Posted by Saberlowe at 3:16 PM